Each Spoken Word Has a Piece of Life Attached to It 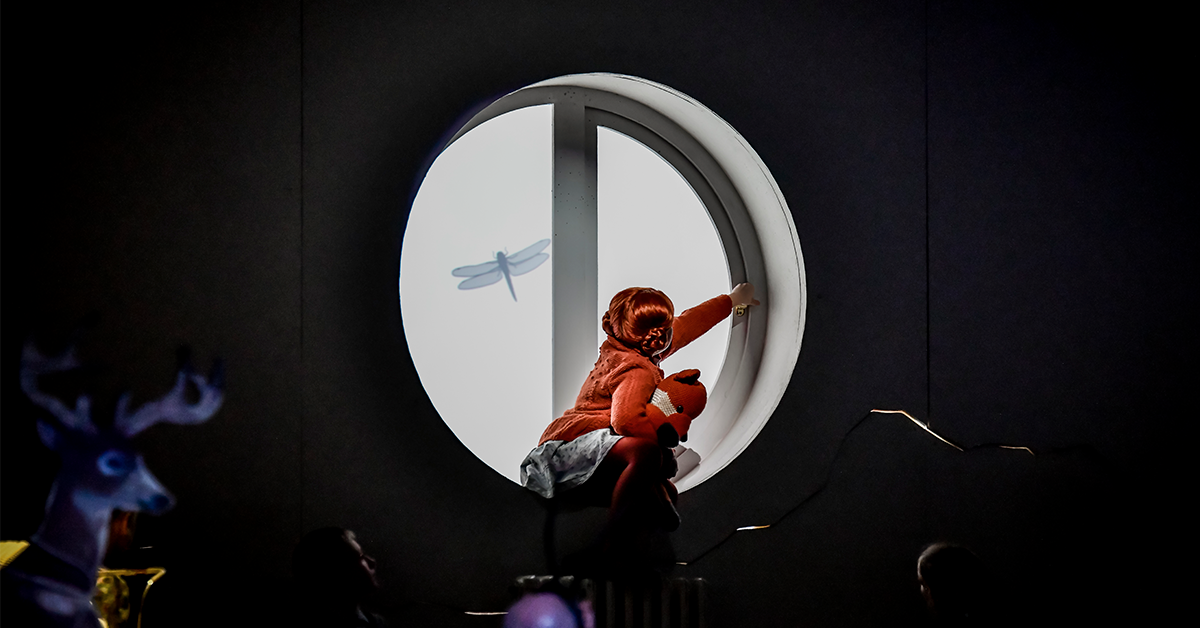 Sound, language and speech are the primary sources of communication for human beings. Each and every word contains the wish to understand and be understood, shaping the invisible connection between humans in different situations. Czech composer Leoš Janáček was interested in human speech and animal sounds, and collected sounds from surrounding environment, fusing the musicality of these sounds into his music and opera works. Patricie Částková, dramaturg of the National Theatre Brno in the Czech Republic, traces Janáček’s rise in Brno and examines two of his most iconic opera works—Jenůfa and The Cunning Little Vixen.

Though by age Janáček (1854–1928) belongs more to the generation of Antonín Dvořák (1841–1904), his compositions were among the most progressive works of music created during the 20th century. Taken in 1904

Leoš Janáček, one of the greatest composers of the 20th century, was born in Hukvaldy in North Moravia, but it was the South Moravian city of Brno that would become inextricably linked to his life’s destiny. He first arrived in Brno as an 11-year-old in August 1865, having enrolled at the foundation at the Augustinian monastery of St Thomas, because his father, a teacher in a small school, could not afford to support 13 children. Janáček was already showing musical talent and, thanks to composer Pavel Křížkovský, was able to enter the foundation. Although Janáček would later remember his arrival in Brno as gloomy, it would be the start of a journey that took him to the summit of the world of art. His environment in Brno played an indisputable part in that rise. The “Bluebirds”, as the choral scholars were called because of their uniforms, were in contact with a number of prominent figures among the monastery’s monks, including Křížkovský himself, Johann Gregor Mendel and the enlightened abbot Cyril Napp. The boys were given a thorough musical education, part of which involved performing at masses in the Basilica of the Assumption of Our Lady, in the monastery’s own musical performances and also in concerts and theatre productions in the city. Nearly 50 years later, Janáček reminisced about his life in the monastery in his composition March of the Bluebird, which later inspired his wind sextet Youth.

Janáček once dedicated his Sinfonietta to the Czechoslovak armed forces, showing his love for the country. Pictured here is the score of its opening movement, a fanfare

Janáček would soon start repaying his city; after his studies at the Slavonic Teachers’ Institute, he stayed on as a teacher and also threw himself into organising Czech cultural life in the Moravian city. He also conducted the choir at the Svatopluk Artisan’s Association and the Brno Philharmonic Society’s choir, Beseda brněnská. His desire to further his musical education took him to Prague and briefly to Leipzig and Vienna. After returning to Brno, he quickly became a major figure in the city’s cultural life. He organised chamber and symphonic concerts and established the tradition of large vocal-orchestral concerts in Brno. He was a co-founder of the city’s Russian Circle and the Friends of Art Club, and was also devoted to music journalism—he published the magazine Hudební listy (“Musical Papers”), was music editor of Moravské listy (“Moravian Papers”), and he contributed to the Lidové noviny daily newspaper and published theoretical studies and articles. In 1881, he established an organ school, which he directed till the end of his life and which became the basis for today’s Brno Conservatory. Janáček became interested in opera during his studies in Vienna, but it was the foundation of the Czech National Theatre in 1884 that led him to compose in the medium, which would later make him world-famous.

Brno was an inspiration to him, as, during his life, he saw its transformation from a cluster of urban settlements to the formation of Greater Brno and its flourishing after the establishment of Czechoslovakia in 1918. It was his city, a city he devoted a unique work to—the Sinfonietta. 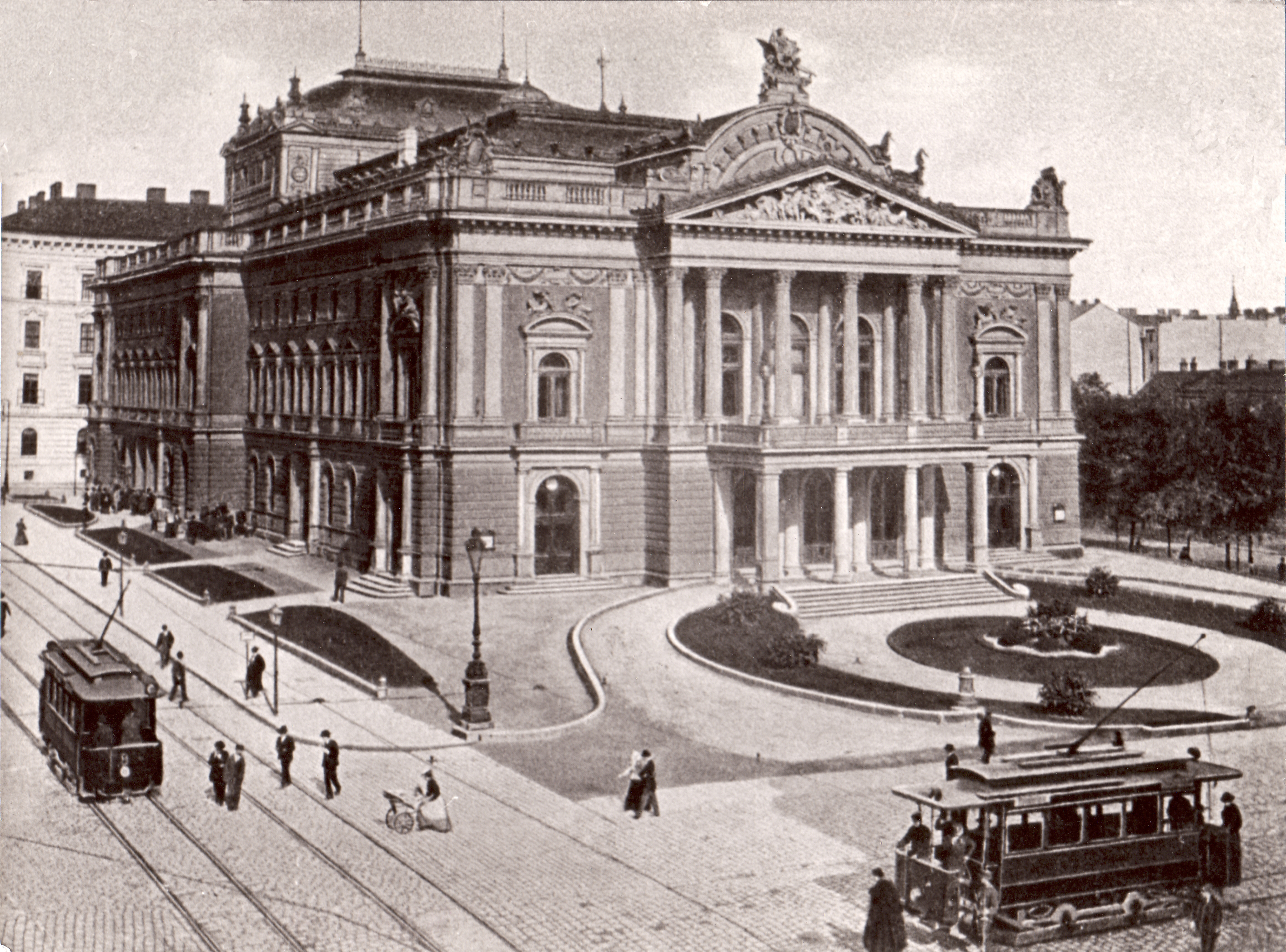 Inaugurated in 1882, Brno’s Mahen Theatre hosted a number of premiere of Janáček’s operas, including The Cunning Little Vixen and The Makropulos Case © Historical Archive of The National Theater Brno

Director Robert Carsen has called Janáček “a school of music all by himself ”, which captures perfectly the composer’s personality, whose foundations we can find in the numerous influences Janáček absorbed throughout his life. Moravian folk music became one of the cornerstones. His interest in folklore was primarily related to the search for inspiration for his own musical work, but at the same time, it grew into a great love of his life. It brought a nearly 40-year period of systematic work focused on collecting (folk songs and instrumental music as well as folk dances) and theory. He recorded, collected and harmonised folk songs and dances and in the years from 1888 to 1893, there was no composition of his that did not have a connection to folk music.

He also listened to and recorded folk speech—he studied speech melodies, not only for their musical qualities, but for everything that could affect a person’s speech: their environment, their age, their life experience and situation. His first score of human speech dates to 1897 and Janáček’s interest in the melodies lasted until his death. He wrote about them in 1905: “The melody of a speech is a true momentary musical expression of a person; it is the photograph of their soul and the whole of their being.” He did not confine himself to melodies of speech; in more than 4,000 recordings, there are melodies of dogs barking, mosquitoes buzzing or floorboards creaking. 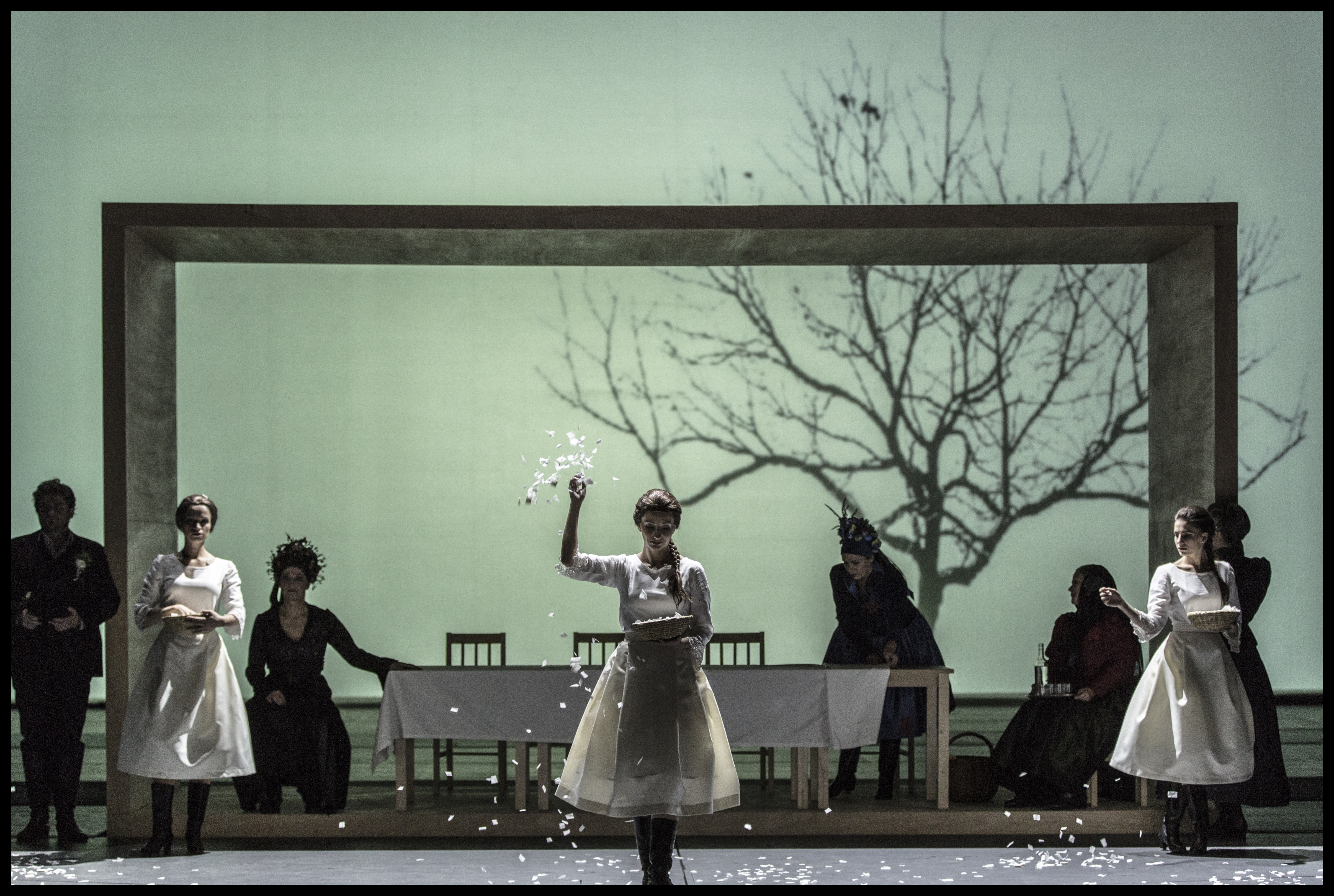 These sources gave birth to the opera that became the foundation of Janáček’s operatic works—Jenůfa. His early works were affected by late Romanticism and folklorism; Jenůfa stood at the beginning of a new journey. Inspired by verismo, composed expressly with a prose libretto, and modified by a composer showing himself to be a true dramatist and brilliant dramaturge, Jenůfa is an interesting study of the development of Janáček’s musical language and his view of theatricality in opera, and a reflection of modern streams of music and drama in his work. Jenůfa took nearly 10 years to compose, and there is a significant shift between the first act, which is predominantly a traditional numbered opera with ensembles, influenced by folklore, and the second and third, written after a gap of several years, where we hear Janáček as we would come to know him in his peak works—in sketchy dialogues with a deep insight into the characters’ mentality.

It might have been the feeling he was yet not able to find the right musical language to truthfully express the mental states of his characters that forced him to put the opera aside for a number of years. There is one more source of Janáček’s inspiration that we should not ignore—his works are often autobiographical, which is also true about for Jenůfa. Janáček’s wife Zdenka Janáčková remembered that their daughter Olga was the model for Jenůfa and he imbued the character with her sorrows (such as Olga’s experience of unrequited love) as well as his “tough love” in the form of the strictness of Kostelnička, Jenůfa’s guardian. In a terrible twist of fate, the composer completed his work about love, self-sacrifice and hope at his beloved daughter’s deathbed. 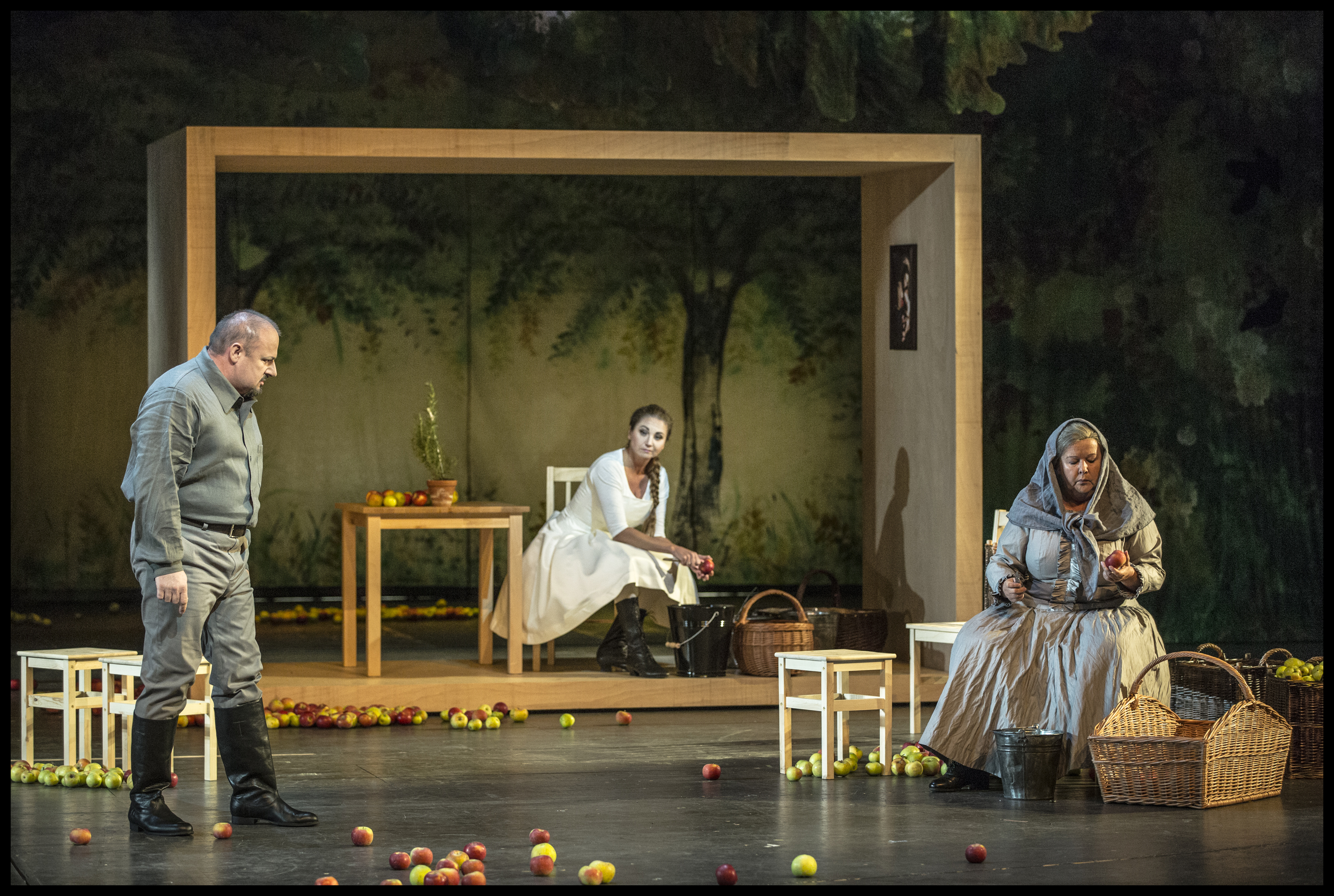 Set in a small tightly knit community, Jenůfa tells the endeavours of Jenůfa (middle) searching for a true love, and the stigma and sacrifices that ensue © Patrik Borecký

Tunes of Nature, Life and Death

There was nearly a 20-year gap between the start of work on Jenůfa and The Cunning Little Vixen, yet even in the latter work, we still see the roots of his journey to modern opera—inspiration from speech melodies, here particularly in the use of the charming Líšeň dialect that Janáček loved hearing from the old women selling poultry at Zelný trh (the Green Market) in Brno. The Cunning Little Vixen is a work from the last ten years of Janáček’s life, his most prolific period, abounding in extraordinary dynamics and energy. In a letter to his muse Kamila Stösslová, Janáček said of it: “It is a happy piece with a sad ending; and I put myself in the sad ending.” The Cunning Little Vixen is not sad though; on the contrary, it is a marvellous combination of the philosophical musings of a composer entering his eighth decade, a colourful image of life in the young Czechoslovak Republic, and the charm of the forests around Bílovice in near Brno. 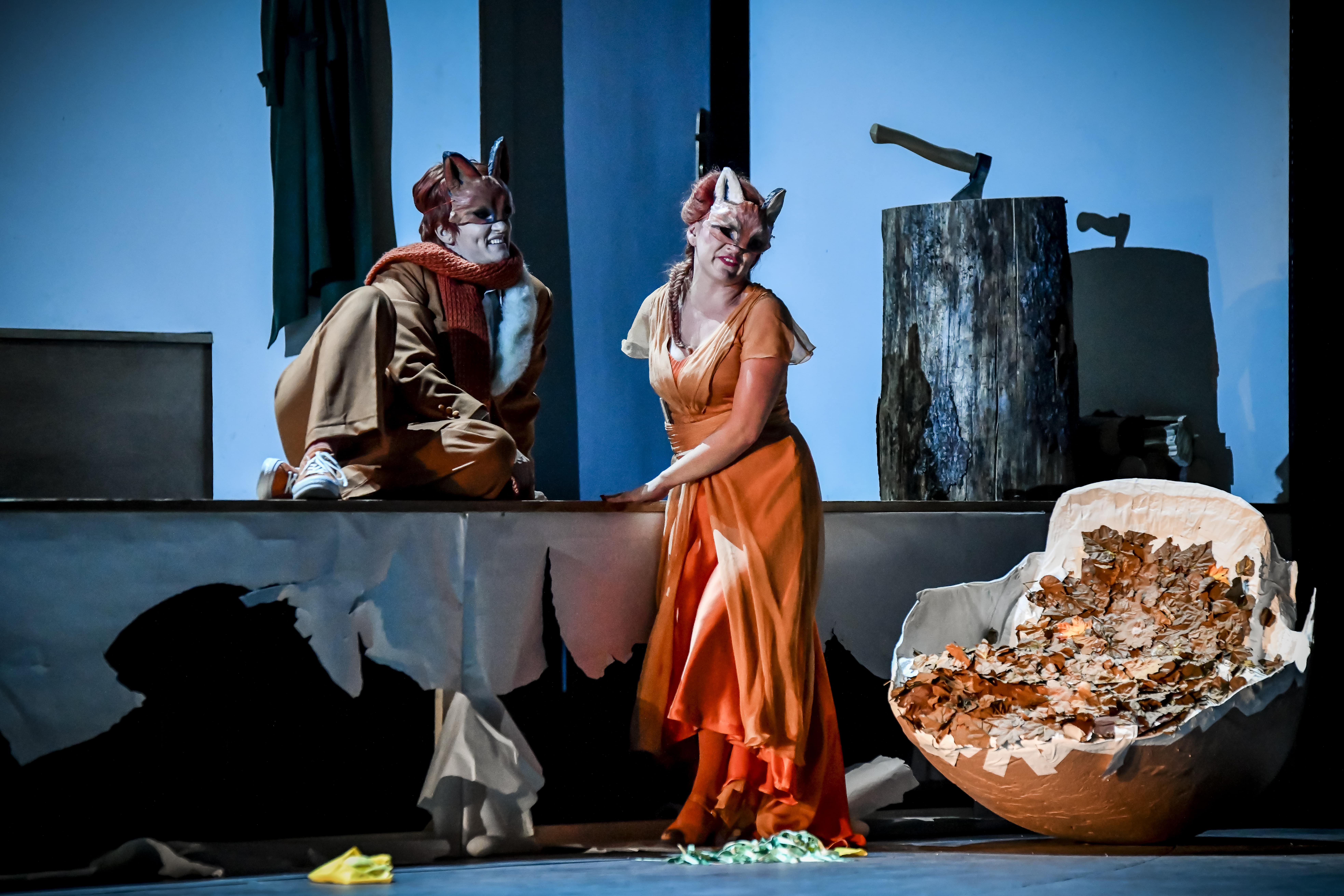 Both romantic and tragic, the love story of the vixen (right) and the fox (left) reminds us the nature and eternal cycle of life © Marek Olbrzymek

Like all of Janáček’s opera, The Cunning Little Vixen stands alone, unprecedented in the genre. On the stage, the world of humans is intertwined with that of animals and, where Rudolf Těsnohlídek and Stanislav Lolek’s comic strip novella, which it is based on, ends with a wedding, Janáček continues and makes the opera a reflection of his view of the world and the eternal cycle of life, and so Bystrouška the vixen dies at the hands of Harašta the poacher. But her offspring, another young vixen, lives on, and so life continues. Everything is how it is supposed to be, and expressed by Janáček’s music—lyrical, melodic, with the orchestra revelling in the colours of the forest and all that lives there. The language of the libretto is a mix of standard Czech and the Líšeň dialect the composer had gleaned from the poultry-sellers years before, as well as the sophisticated speech of Brno high society, as seen in the diction of the fox, who woos the vixen with a cigarette and a rabbit. The drama sparkles with humour, at times spiky but generally good-hearted, seen through the eyes of the Forester in the opera, who is looking back at his own life as the curtain closes. 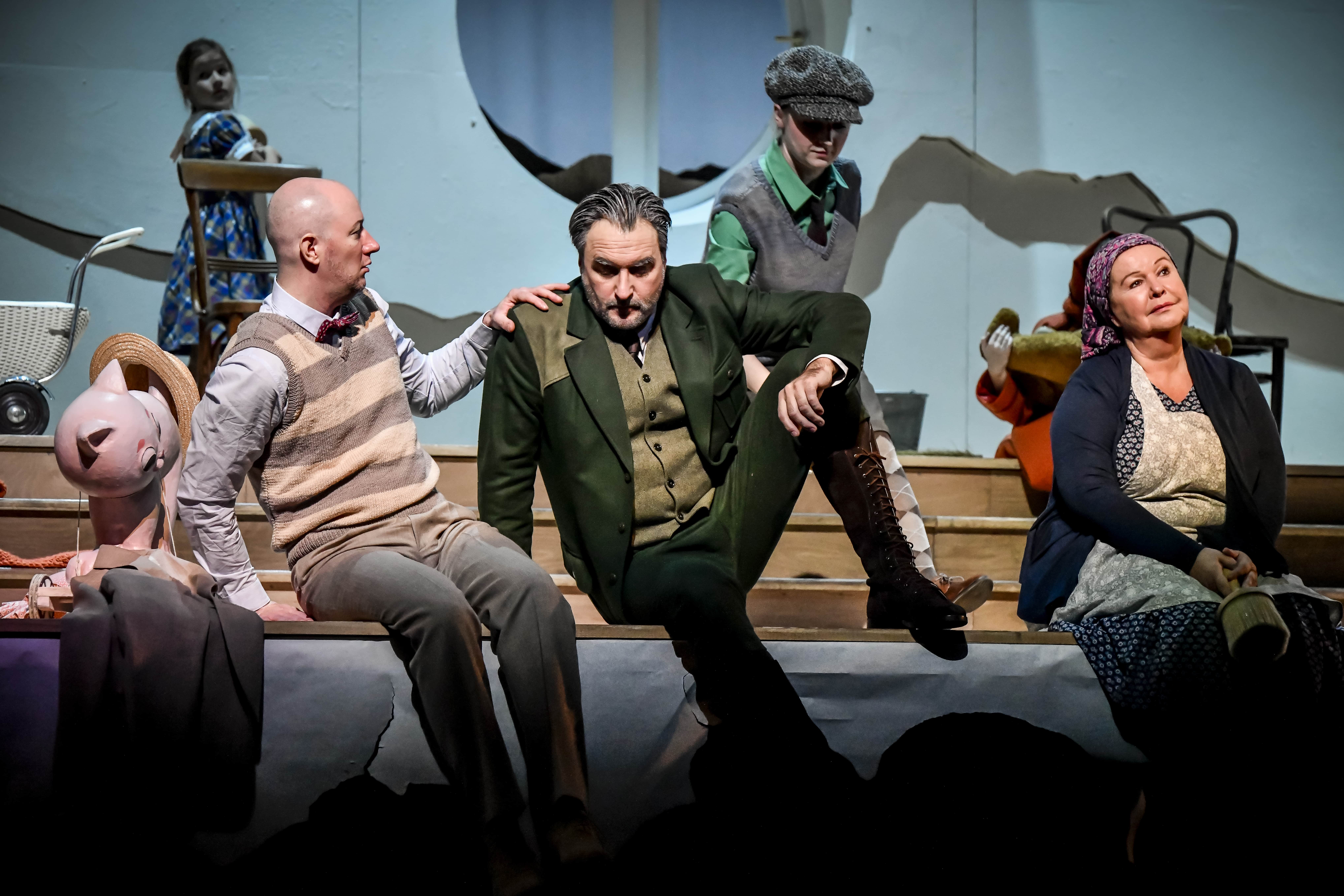 The story of The Cunning Little Vixen unfolds as the Forester (middle) meets the vixen, with each having their own encounters © Marek Olbrzymek

Text
PATRICIE ČÁSTKOVÁ
Patricie Částková is the dramaturg of the Janáček Opera at National Theatre Brno. She has taken part in more than 70 of the company's opera productions, and works as a lecturer in a number of educational projects 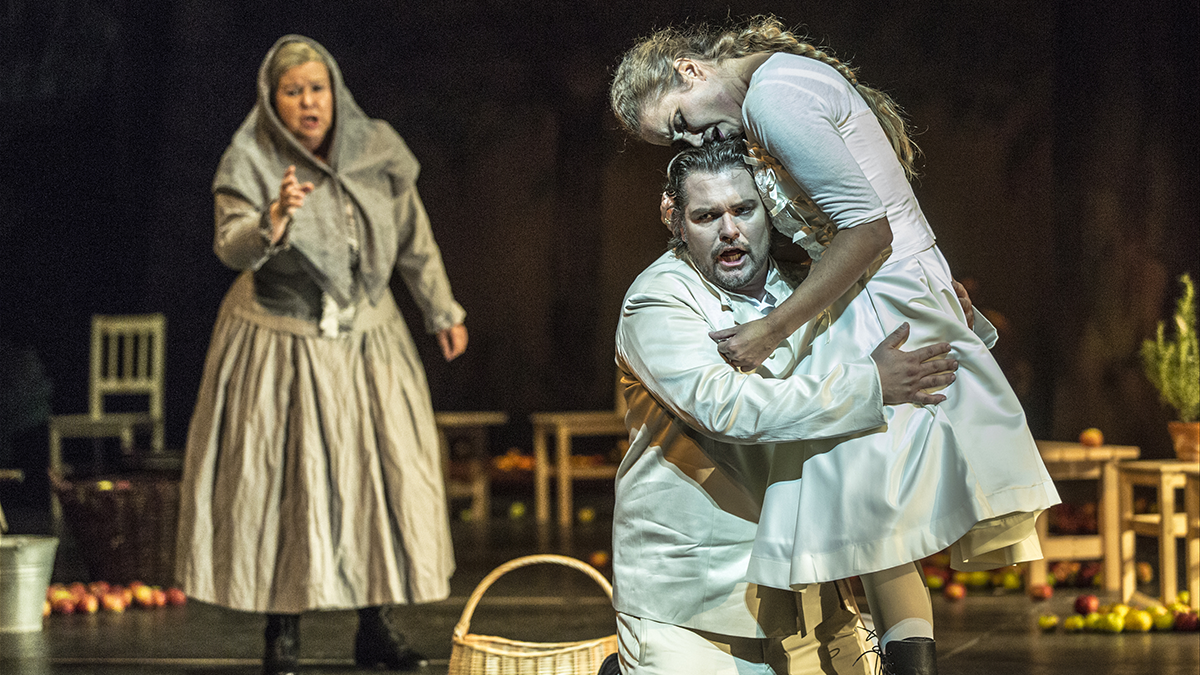 Janáček’s Jenůfa has remained as universal and poignant since its premiere, despite its long-drawn rise to national acclaim. A staple of the National Theatre of Brno, this award-winning production retells the disfigured heroine’s tragic loss and her ultimate redemption through the discerning perspective of the camera. 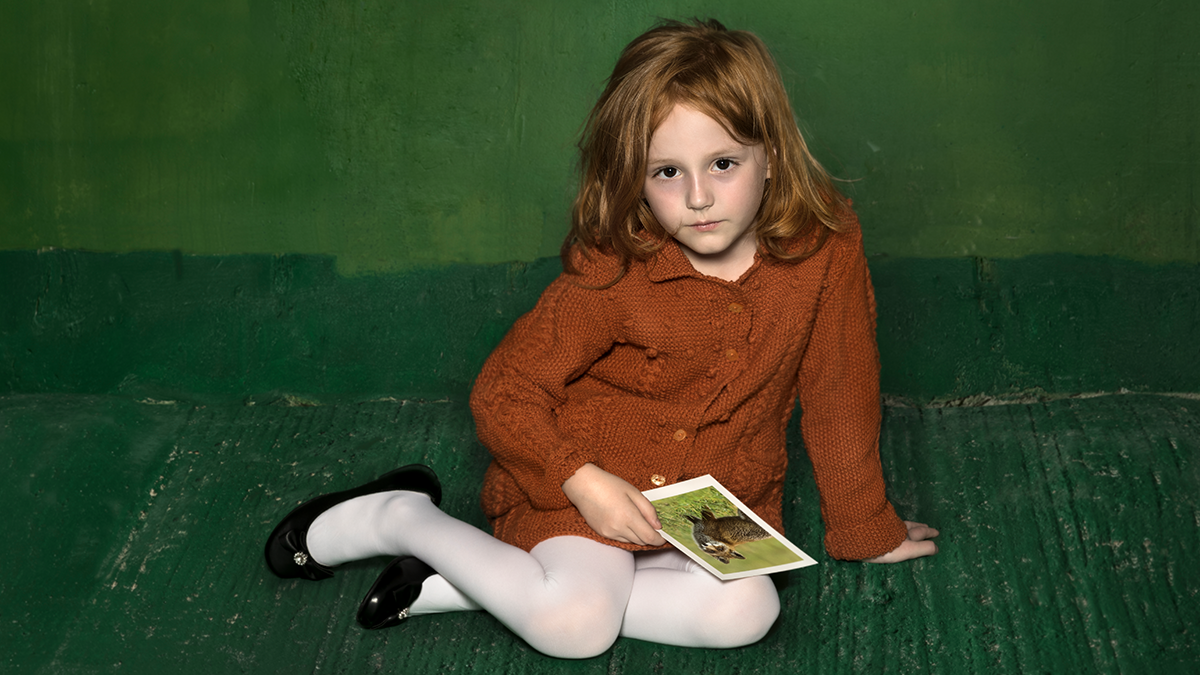 Inspired by a newspaper comic strip, Janáček fashioned this operatic fable out of imaginary characters from his native rural Moravia. Unfolding in a picturesque woodland setting, the adventure of the vixen and her companions promises to be a welcoming choice for the whole family.